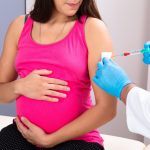 Influenza vaccination can be underused among pregnant women, despite evidence it can protect both the mother and infant from the flu.

A team, led by Fatimah S. Dawood, MD, Influenza Division, Centers for Disease Control and Prevention, quantified the risk of antenatal influenza and examined its association with perinatal outcomes.

In the prospective cohort, the investigators examined 11,277 pregnant women in India, Peru, and Thailand prior to the 2017 and 2018 influenzas seasons, of which 1474 (13%) received influenza vaccines. Each participant was at least 18 years old with expected delivery dates 8 weeks or more following the start of the influenza season. The median age of the patient population was 26 years old and the gestational age was 19 weeks.

The researchers contacted the women twice a week until the end of the pregnancy to identify illnesses with symptoms of myalgia, cough, runny nose or nasal congestion, sore throat, or difficulty breathing. They also collected mid-turbinate nasal swabs from symptomatic women for influenzas real-time RT-PCR testing.

In terms of safety profile, 1.1% of those who received the vaccine experienced an adverse an adverse event—versus 1.0% in the placebo group.

Furthermore, 0.1% in both the vaccine and placebo groups had severe treatment-related treatment-emergent adverse events.

The primary outcome for this study was relative vaccine efficacy to prevent laboratory-confirmed influenza-like illness caused by any influenza strain.

The study, “Incidence of influenza during pregnancy and association with pregnancy and perinatal outcomes in three middle-income countries: a multisite prospective longitudinal cohort study,” was published online in The Lancet Infectious Diseases.